Please note that the mobile library will not be visiting Sinclairston or Hayhill on Wed 8th Dec due to staff training. Apologies for any inconvenience this may cause 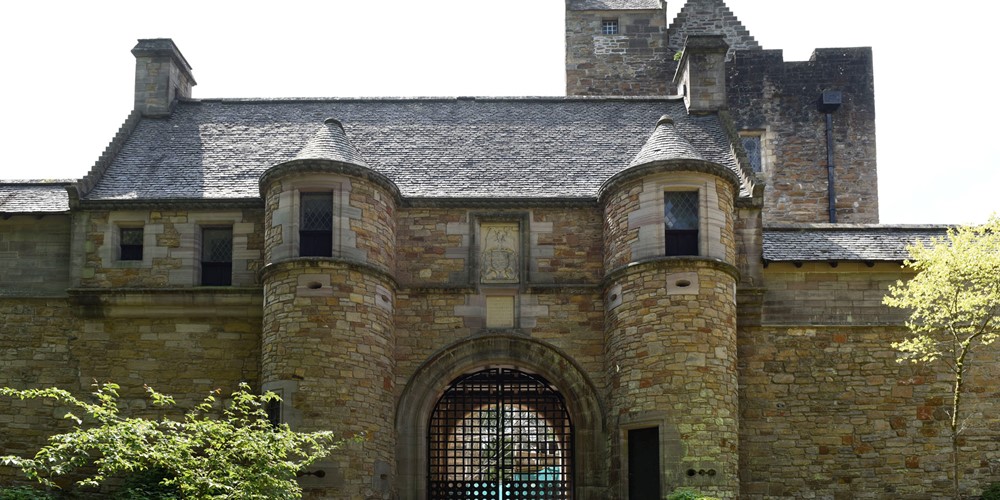 While major repair and refurbishment works are underway at Dean Castle. The Castle's outstanding collections of early musical instruments, arms and armour and tapestries have been taken to the Dick Institute for safe-keeping and display. The Castle Collections display is free to visit - opening times of the Dick Institute can be found here

Dean Castle was the home and stronghold of the Boyd family for over 400 years. The Keep, dating to around 1350 will house outstanding displays that tell the story of the Boyd family and medieval life, as well as East Ayrshire’s stunning collection of arms and armour, once restoration is complete.

The 15th century Palace was spectacularly rebuilt from ruins by the 8th Lord Howard de Walden in the 1930s. The result is a sensitive restoration in keeping with the interior design of the 16th and 17th centuries and even re-using original 17th century fixtures and fittings taken from Balfour House, Fife. This building will tell the stories of the Howard de Walden family and showcase an internationally significant collection of medieval musical instruments

Dean Castle’s collections of objects are of international significance. From the exquisite craftsmanship and rarity of the musical instrument collection to the Viking sword that fires the imagination, the Dean Castle collections - as well as the buildings themselves – represent over 150 years of collecting and over 1,000 years of the history of Ayrshire, its people and beyond.

East Ayrshire Council, supported by East Ayrshire Leisure, were awarded £1.5m from Heritage Lottery Fund towards the restoration and modernisation of Dean Castle. The project has a total cost of £5.2m, with funding of £500k also secured from Historic Environment Scotland, and the remainder coming from East Ayrshire Council. The Castle was originally due to re-open in 2021 but due to the pandemic, it will now re-open at the end of 2022 and we will continue to provide updates as work progresses.

The project involves the refurbishment of the Keep, Palace, Gatehouse, Courtyard and Laundry buildings as well as returning the collections for a redisplay and new interpretation for visitors. The interior of the Palace will have new display cases, housing the key objects from the collections and more information on the history of the De Walden family and the Keep will be dedicated to telling the story of the Boyds.

Some of the most recent work includes....

With external works to the Palace now mainly complete, including steam cleaning of the stonework, lime mortar repointing, slate repairs and window refurbishment, focus has moved to the interior of the building with the floor of the Banqueting Hall being lifted and pipework installed. The timber floor is being re-laid and pipework alterations to the kitchen area have also been completed. Plasterwork to the Banqueting Hall ceiling is also underway. 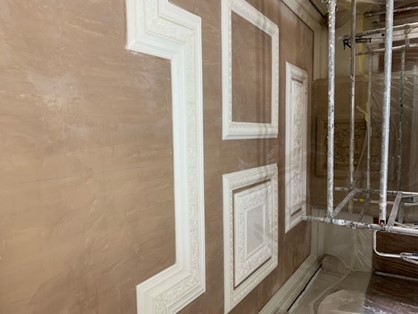 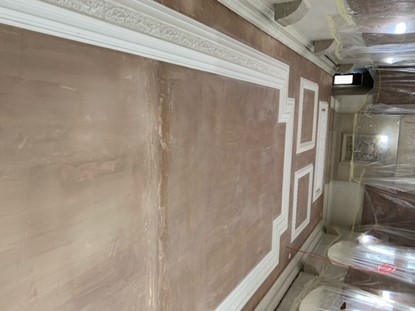 The most recent work to the Gatehouse has included the completion of works for dry rot and floors have been lifted to allow for services. Upgraded mains power cables and alarm systems have been installed and the cobblestones within the Gatehouse arch are being reinstated after underground works in that location were completed.

At the Gate Lodge & Entrance Walling, the chimney has been taken down and is currently being rebuilt. The entrance walling has been steam cleaned and stone indents are progressing. Scaffold has also been erected at the gable end of the Dower House and repointing work is underway which will be followed by slate work and new stone copes. 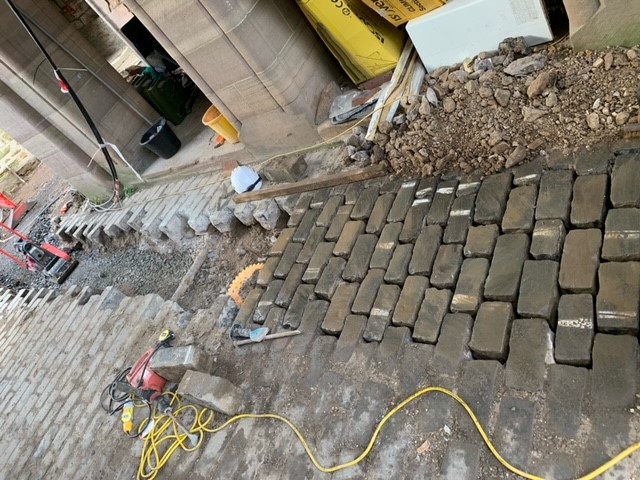 Paintwork to the exterior is progressing (as and when weather allows). Foundations have also been poured for the retaining wall and the building of this is due to start very soon. Internally, joinery work and plastering is also underway in these buildings. 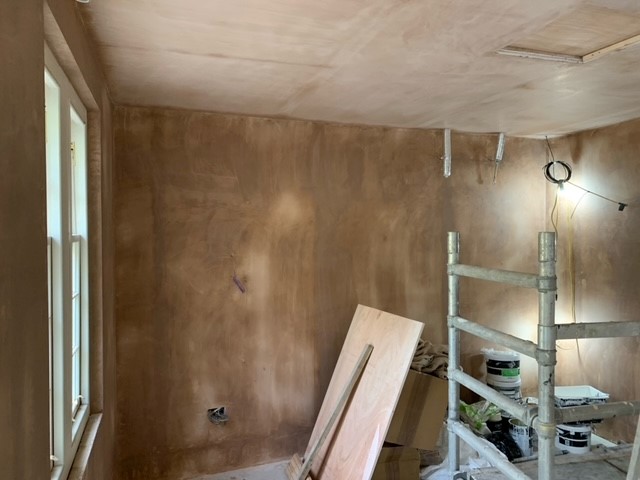 Work on the Sensory Garden is also underway. Tree removal has been completed and new levels in this area have been formed. Fencing of this area will begin as part of the next phase along with new membrane being installed in the pond.

New interpretation will be part of this project and will tell the story of the Boyds, the DeWaldens and the collections for our visitors. Work on this interpretation has begun  - here's a little sneak peek of how it will look

How to Get Involved

As we draw nearer to the re-opening of Dean Castle, there will be lots of opportunities for volunteers to get involved and become a Friend of Dean Castle Country Park.   If you are interested in helping to share the history and heritage of the Dean with all our visitors, then our Visitor Experience volunteer role could be for you. Or maybe work behind the scenes with the Textile Team, an incredibly talented group who care for the delicate fabrics in the Castle’s collections would be of interest. The Kitchen Garden will need some green fingered volunteers to tend to the flowers, fruits and herbs during the summer and there will also be opportunities to volunteer at the Castle’s grand re-opening events…but those are top secret for now!

Recruitment for volunteering roles as part of this project will begin in Summer 2022 and more details will follow in due course. In the meantime, why not check out the other roles available at the Country Park with the Friends of the Dean Volunteer group while you wait.

If you are a fan of Outlander then a visit to Dean Castle when it re-opens is a must as it was used as the location of Beaufort Castle in S2 of the hit TV series.

From the North and South (Glasgow and Prestwick Airports). From A77, take the B7038 turn off,

follow the B7038/Glasgow Road towards the town centre and turn left onto Dean Road. The main

car park is on the left.

to the Country Park.

Dean Castle Country Park is on the National Cycle Network. Use Route 73 to get here. 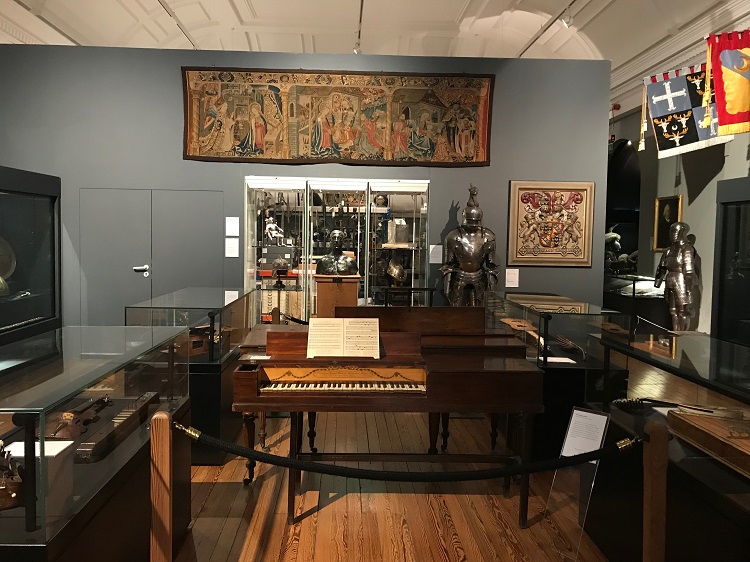